Rooftop vs. community solar: which is right for you?

Aug. 3, 2020 – Solar power is no longer just for the wealthy. Many households can actually save money by going solar nowadays, thanks to steadily falling prices.

So increasingly, the question is no longer whether to go solar, but how: rooftop or community solar? 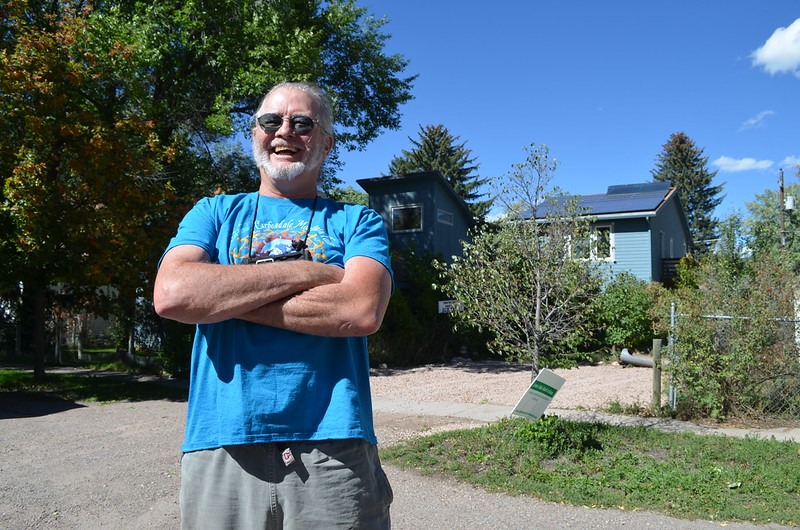 Here in western Colorado, we’re fortunate to have the choice. Our state has solar-friendly policies that make both options available and relatively affordable. But which way to go will depend on a number of factors, and it’s worth doing your homework to make sure you choose the one that’s best for your situation.

Let’s first take a minute to define terms. Rooftop solar, of course, is by now a common sight in neighborhoods. A typical system consists of a set of panels that turn sunlight into DC electricity, along with an inverter to turn that into the AC that comes out of the wall. The vast majority of these systems are grid-connected, which means the building can draw power from the solar system or buy it from the grid, and it can sell excess power back to the electric utility. An off-grid system will also need to have battery backup.

Community solar refers to standalone systems that generate enough electricity to power the equivalent of dozens to hundreds of homes. Also known as solar farms, these systems are typically constructed and owned by a third-party developer under a power purchase agreement with the local utility. There are various ways to finance these projects, but the most common way is to sell subscriptions to customers of the utility – and that’s what makes community solar an alternative to rooftop solar.

Now, before we get to comparing rooftop vs. community solar, it’s important to stress a couple of points.

First: Both are great! One is not better for the environment than the other. Whether you put solar panels on your roof or you buy a share of a larger project elsewhere, you’re reducing your emissions and adding to the resiliency of the electrical grid.

Second: No matter how sold you are on solar, consider energy efficiency first. Very often, it’s cheaper to save a kilowatt (by upgrading lighting, replacing that old fridge, maybe investing in a more efficient cooling system) than to buy a kilowatt’s worth of solar panels. That’s why solar rebate programs typically require that you do a home energy assessment – the assessment may reveal some cheap fixes that can enable you to reduce the size (and cost) of your solar system.

So, how to decide which one is right for you? The quick and dirty answer is that if you own your home and plan to stay in it for a few years, if you’ve got a suitable roof, and if you’re able to borrow at least $10,000 at a decent interest rate, then a rooftop system is probably your best bet. (If not, skip the next two paragraphs to the part about community solar.)

For those who can, going with rooftop solar has a lot of advantages. For one thing, it will save you more money over the long run. Exactly how it pencils out will depend on a multitude of factors – tax credits, cost of borrowing, cost of installation, rebates – but in general, the ownership model yields the greatest rate of return.

You’ll probably see a modest net savings every month until you’ve paid off the loan (probably after 10 years), and then the produced electricity will be free for the remaining life of the system (probably another 10 years). Plus, the system is an asset that adds to the value of your home. It’s also possible to lease a system, although that will mean less savings over time.

For many, energy independence is the key attraction of rooftop solar. It’s a great feeling, knowing that you’re producing your own power and that you’re minimally reliant on the electric company and insulated from rate increases. Plus there’s the pride factor – the panels are up there where everyone can see, showing that you’re doing your part.

Community solar has its own advantages – mainly, ease and flexibility. You can sign up online in a few minutes, and unsubscribe at any time (although there may be an early termination fee). You don’t have to get bids and line up financing. There won’t be construction on your roof, and you won’t be responsible for maintenance. Someone else owns the array and they charge you for the electricity from it, pretty much like a conventional utility.

The main problem with community solar? Historically, it hasn’t been available in most places, most of the time. But that’s starting to change.

In Garfield County, the availability is amazingly good, but the offerings depend on where you live. If you’re in Xcel territory, you’re in luck – developers are starting to come online with subscription programs that provide solar electricity at a savings (see previous article). If you’re a Holy Cross customer, you can enroll in their PuRE program, which delivers a 100% renewable energy mix for a small surcharge on your bill.

Questions? Contact one of our energy coaches and they’ll be happy to walk you through your options.